Here in New England, this is the time of year when bugs and bees are most active. And also the time of year when we’re most susceptible to their bites and stings. This year it’s especially true because of the mild winter we’ve just had. For example, ticks, which carry Lyme disease, don’t hibernate. All they need is a mild winter to provide more days and weeks to breed more ticks.

Although most bug bites and stings are harmless, some can be dangerous. This is especially true if you are allergic to the bug’s venom, or if the bug is carrying a disease.

In the United States, it’s common to experience a bite or sting from the following types of bugs: mosquitoes, fleas, bedbugs, biting flies, mites, bees, spiders, ticks, and fire ants.

If you’re travelling to a different part of the country, such as North Carolina, Oklahoma, Arkansas, Tennessee, and Missouri where Rocky Mountain spotted fever is most commonly found, or outside of the country, where dangers like the Zika virus are lurking, you should make it a priority to learn which insects and habitats to avoid or be wary of.

Most bug bites and stings can be safely treated at home with topical medication, such as hydrocortisone cream or ointment, or an oral antihistamine to reduce the itch. However, sometimes a bug bite or sting can turn into something serious – particularly if you have been bitten or stung by many insects at the same time.

If you experience any of the following symptoms after a bug bite or sting it is advisable to go to the emergency room immediately:

Although most bug bites and stings are not life threatening, it’s important to pay attention to your symptoms. If you have any of the following, be advised to see a board-certified dermatologist or skin care specialist right away: 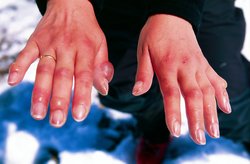 Protect Your Skin From Frostbite